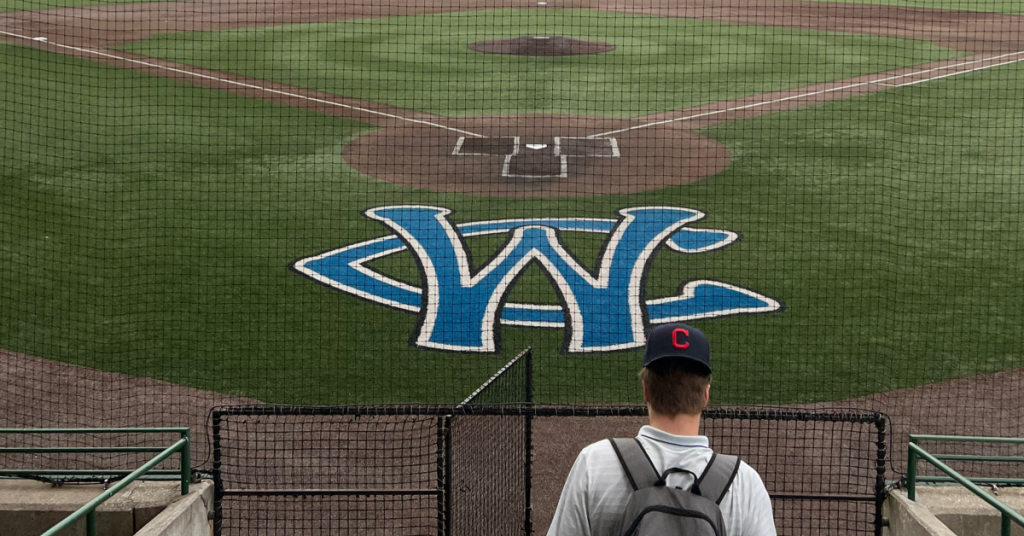 The Electrons were held to 1 hit and 1 run, racking up 14 strikeouts, as the Hounds claimed victory in Game 1 of the K’s CMBA Championship Series at Ozinga Field Monday night.

After making arrangements for off-season arm evaluation and reconstruction, Colin French took the mound to start the series for the Hounds. The southpaw uncharacteristically struggled with control, but he managed to maintain power, fanning 7 Electrons and allowing only one hit on an opposite field flare.

The Hounds scored first in the second inning, capitalizing on a Rondón (2B) single and a Jessee ROE. The run was responded in kind by a bases-loaded walk in the following inning, resulting in a 1-1 tie. The Hounds defense continued to show up and gave it their all in a 0 error effort. Greg Sells (SS) helped keep the third inning quiet, jumping and swiping a liner that threatened to lead the inning off with a single. Garrett Eddy (CF/P) came in for relief and, picking up where Colin left off, similarly dominated opposing hitters. His first inning was terminated with a chopper corralled by Alberto Martinez (1B) and shoveled to a galloping Garret at first base. Japheth Bandi led off the sixth with a single, and Pedro Rondon (2B) beautifully executed a sacrifice bunt to move the runner over. Unfortunately, pinch runner Mike DiCola would find himself stranded on a popout and strikeout to end the inning.

Following a tense, two runners on, strikeout to end the Electrons sixth, the Hounds leadoff man Sells drew a one out walk. Eddy, stepping to the plate with two outs (and a wood bat) in the top of the seventh, blasted a towering drive to the deepest part of the park. The ball landed short of a wall, but far enough to earn the reliever an RBI triple. The Hounds took a one run lead into the bottom of the last frame. The inning began with what looked like a Texas leaguer single, but Pedro “It’s Today! It’s Today!” Rondon chased the ball down to shallow right to squeeze the out. The following batter was thrown out of the game mid on a 1-2 count, owing to an expletive filled response to a legitimate strike call. The reliever turned closer finished that strikeout and the next strikeout to complete the victory.

The Hounds will rematch the Electrons same time, same place on Tuesday night.