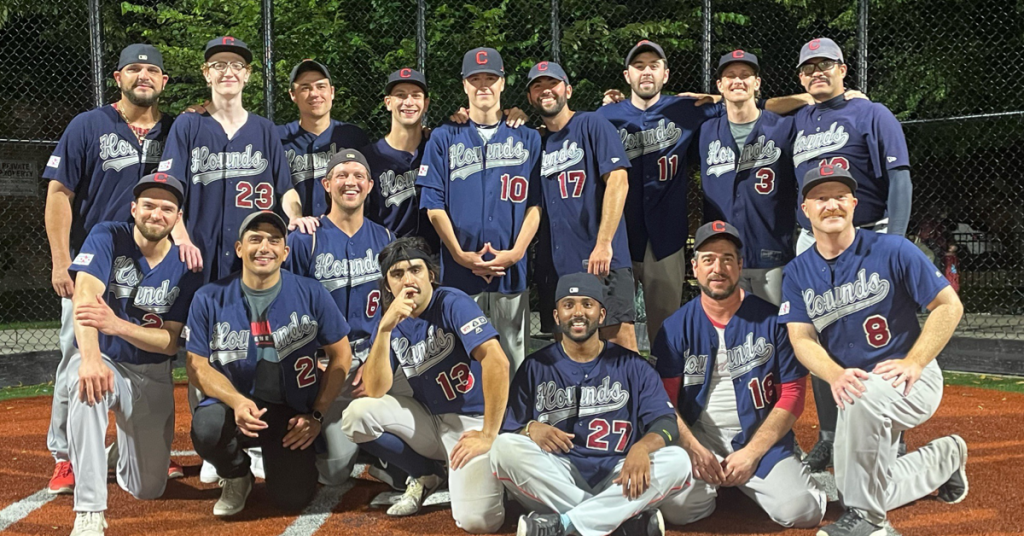 After an intense 8 innings at Simeon, the Hounds came out on top 5-4 to advance to their first championship series in franchise history.

Mike “Sizzle” DiCola swooped in for the start and contributed 4 innings of work, holding the first seeded Dodgers to 1 run, notching 3 Ks and allowing 3 walks.

DiCola got his earned run out of the way early, relenting an RBI single to the veteran 3-hitter before settling in. The starter was helped along by a strong defense who committed only one error all night. His second inning featured a clutch pickoff 1 to 3 to 6, neutering a lead-off single. In the third, Greg Sells (SS) nabbed his team their first run on a single (1B) to throwing error (2B) to stolen base (3B), to wild pitch (Home) “I’ll do it myself” effort. In their half, the Dodgers made a threat when a long drive was blasted with a man on first, but Japheth Bandi (RF) would have none of that. After tracking the ball down, he relayed it through Sells, to catcher Tony Correa who ran down and tagged the caught runner to save a run. Following up in the next inning, Sells drove another single and was brought around to score on a 2 RBI deepest-possible-double by Alberto Martinez (1B) to give the Hounds a 3-1 lead.

Atticus Conway, on short rest, took over for DiCola in the fifth. The Dodgers jumped on early, tying the game immediately. However, leading off with a tie game in the sixth, player/manager Correa mustached a single before being exchanged on the basepaths on a fielder’s choice. The exchanger and turf sliding expert Arron Kruse (3B) stole second before being brought around by a Tim “‘stacheman” Riggenbach opposite field single before the end of the inning. Start the Dodger’s half was a strikeout and an incredible hit-preventing effort by Rondón (2B) and stretch by Alberto “Long Toes” Martinez before they managed to cobble together the tying run on a pair of singles. Facing the number 2 hitter with runners on 2nd and 3rd with two outs, the Hounds spindly reliever reached deep and delivered a clutch strikeout to maintain the tie.

A quiet seventh led to extra inning play. With one out, Greg Sells reached base for the fifth time when his long drive to left skittered out of the corner of play. Riggenbach drew an intentional walk and Martinez drew a pitch-around walk. Matt “Expectant Daddy” Burch came in as pinch hitter to draw a walk on an incredible 7 pitch quality-at-bat to drive in the go ahead run. Brian Lehman (LF/P) came in to close the game, immediately recording a 4 pitch K. The next play brought a pinch hitter and a bunt attempt then a slap attempt, the bouncer up the line bare-handed by Kruse who fired across the diamond for out number two. A hit by pitched followed and its speedy recipient narrowly stole 2nd base on the next pitch. With the winning and season ending run on second, Brian Lehman looped a 1-2 curveball down the middle to get the backwards K and the win.

The Hounds mobbed the field in the victory celebration, drowned in kind by cheers from the incredibly vocal cheering section. Fathers, mothers, brothers, cousins, wives, girlfriends, and friends basked together in the postgame glow. The Puppers were finally treated to winners-only Fireballs on Big T’s tailgate before leaving and reconvening at sponsor K’s Dugout where, as one teammate put it, they “danced more than at most wedding receptions” until the bar politely asked them to go home. They will have a few days off before taking on the rival Electrons in their first CMBA championship series at Ozinga Field Monday night.