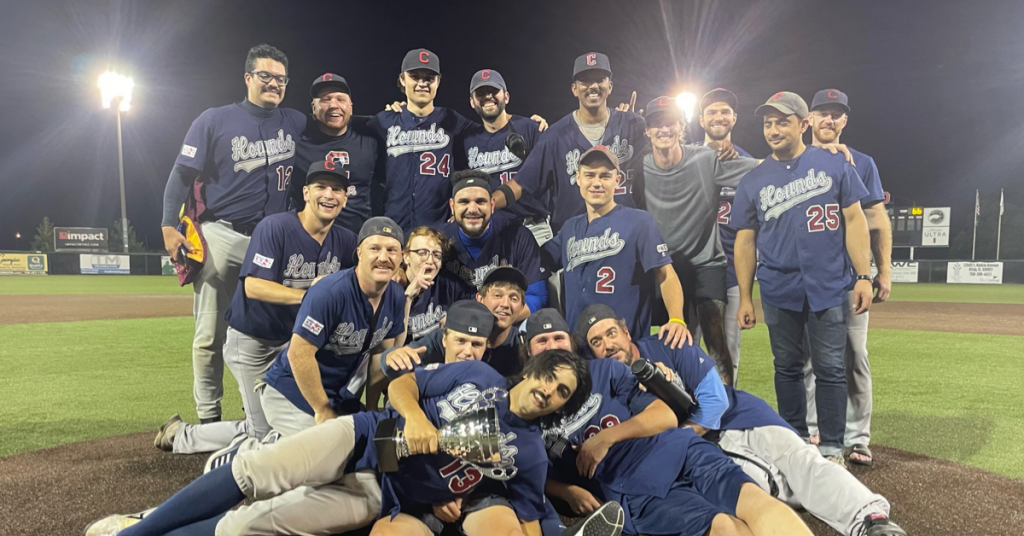 Before seemingly all of their fandom, the Hounds scratched and clawed their way to their first ever championship in an extra inning barn burner under the Tuesday night lights of Ozinga Field.

Rookie Atticus Conway got the nod for the elimination game. The right hander gave a characteristic performance needing 94 pitches for 6.1 innings of work before needing relief.

The Hounds scored early, taking advantage of the Electron pitcher’s command issues and an RBI single by Brian Lehman (3B) to take a 3-0 lead. After two quiet innings, the game was knotted at 3-3 when a ROE (the only Hounds error of the night) was followed by two singles. The Tron half of the fourth brought an early scare with a lead-off single but was limited thanks to a clutch-rolled 6-4-3 double play. The Hounds would make their response in that half, scoring two with two outs from the top of the lineup. A Sells (SS) single, a Riggenbach (DH) FC/ROE, and an Eddy (CF) single put the Hounds up 5-3. After taking a HBP, the Electrons 2-hitter stole second base and a advanced to third on a ball in the dirt. But, Atticus took advantage of the eager runner and fired a pick off attempt towards third and Brian Lehman (3B) put the tag on the crawling runner to secure an out. The rookie then finished the inning with a swing-and-miss strikeout on the next pitch. In the fifth, A towering blast to right by Pedro Rondón (2B) was wasted on a smoked comeback line drive double play. In the sixth, a textbook bunt over by Brandon Jessee (LF) provided a potential insurance run in scoring position, but he, too, was stranded.

The top of the seventh inning provided a quick out to start. Followed up by two walks, Mike DiCola came in relief to provide one out. After a walk, the Electron 3-hitter, facing elimination, crushed a long drive to clear the bases and give his team a 1 run lead. The Electrons tacked on one more before reliever Garrett Eddy came in to provide an inning-ending strikeout.

After providing the strikeout, Eddy provided a leadoff single and Alberto Martinez (1B) reached on an error. After a fly out was recorded, Rondón made a productive out moving over the runners to second and third on a ground out. With two outs in the inning, the game hanging in the balance, Lehman sliced a line drive single to score the two on base and tie up the game. Lehman moved as far as third before the last out was recorded, sending the game to extras.

A leadoff single in the top of the eight was neutralized by a first-of-the-season caught stealing throw by catcher/manager Tony Correa, proceeded by a K and a walk/pick-off out. A quiet bottom 8 and top 9 lapsed. The Hounds had a chance in the bottom of the ninth with a two-out double by Rondon, but they could not bring him home. Eddy provided another quiet half in the tenth, notching two more strikeouts, bringing his K total to 7 (of 12 faced).

Joe Malafronte (DR/2B) led off the bottom of the tenth and drew a ball in the arm for an HBP. Sells followed by drawing a walk. Cole Thompson (CR/CF) then stepped up with men on first and second and dropped down a sacrifice bunt. The pitcher moved to field it, fired to first to secure an out of the quick runner, but the throw was wide. The ball zipped off target and past the first baseman. Malafronte sprinted around third, tagged the plate, and became the winning run for the championship.

The dugout and stands erupted. Hounds and Former Hounds, families and extended families, friends and friends of friends all raucously cheered for the newly crowned champions. Hugs, congratulations, and photos were had. Following the postgame on-field celebration, wives, girlfriends, and players made the trek north to K’s Dugout. As the sang and danced, they drank from their new bucket: the 2022 CMBA championship trophy.

The Hounds will reconvene at K’s Saturday night for the Houndies.