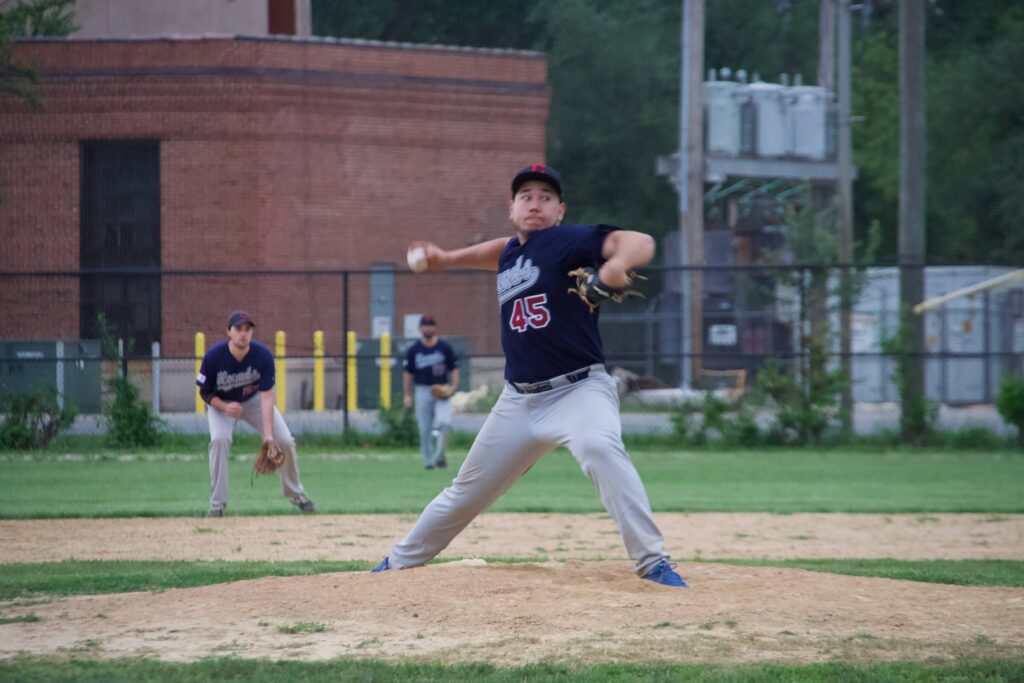 Without an umpire, the Hounds took down DegenerateX at Maywood by a final of 11-3, evening the season series at 1 win a piece. The win marked a return to play for the Hounds, who had not completed a game since June 19th due to rain.

Due to some traffic struggles, rookie Adrien Kelly (#45) secured his first start on the mound. With his younger brother in attendance, the elder Kelly put on a clinic, allowing only 4 hits and 3 runs on the day and tallying 6 strikeouts. He lasted 5-2/3 innings and 105 pitches before handing the ball to Brian Lehman who record the last out required on a strikeout.

The Degens took a 2-0 lead into the 3 bottom of the third, when the Hounds broke seized the lead. Cole Thompson (#24, LF) lead off on a walk, Tim Riggenbach (#8, EH) reached on an error, and Phil Oweimrin (#25, EH) walked (the first of 3 walks PJ begrudgingly accepted on the day). Greg Sells (#19, C) put the Doggos on the board with an RBI sacrifice drive to center. With two outs, Garrett Eddy (#17, CF) stepped to the plate and roped a ball down the right foul line. The umpire/Degen-catcher shrugged it a fair ball and the resulting double scored the two remaining runners to capture the lead for the home team. Arron Kruse (#11, 3B) and Brent Fukushima (#27, SS) each knocked in an additional run with a double and single, respectively, cushioning the lead at 3. That would be all the lead required for the win. In the middle innings, Joe Malafronte (#17, RF) rocked a double deep and was knocked in by Phil Zelenka (#21, 2B), and tacked on additional insurance when Eddy knocked in Oweimrin on a groundout. In an unnecessary bottom of the sixth inning, the Hounds broke it open with a pinch hit 2-RBI single by “Mr. .600” Alec Reinke (#14) (who took home on a passed ball) and an RBI rocket by Sells. Due to darkness, the seventh inning was not played, and the Hounds were victorious.

A subset of Hounds celebrated the win at Old School Tavern in Forest Park. Their record improved to 8-11. The Hounds will compete for the K’s cup with two games against the Electrons over the weekend. They will need to win both games, as they enter the contests down 1 game in the series.