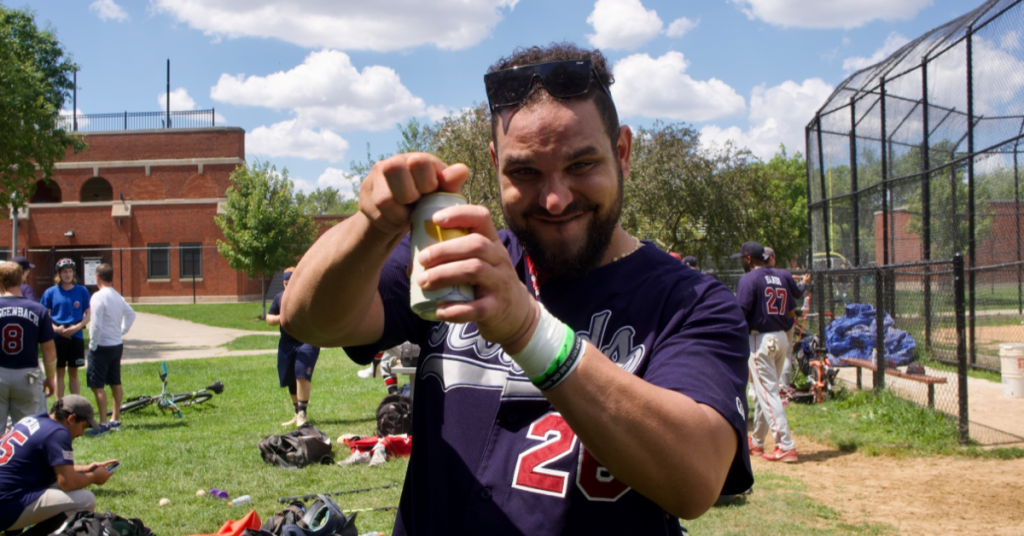 For the first time (since at least 2010), the Hounds hosted the Marlins at Winnemac Park and, in a game for the storybooks, claimed victory 8-7 to advance in the CMBA playoffs.

Rookie Atticus Conway earned the start and pitched an efficient gem, hurling 67% of his 94 pitches for strikes, striking out 3 and offering only one free pass.

The Hounds took an early lead, scoring in the second and fourth inning on RBI singles by Arron Kruse (3B) and Tony Correa (C) respectively. Atticus and his defense kept their opponents quiet, thanks to solid defensive play, particularly by third baseman Kruse and outfielders Jessee (CF) and Bandi (RF) who put out the Marlins 8 times on fly-outs, batted balls that may have been much scarier at the relatively smaller Southwest Park.  The Marlins tacked on their first run in the fifth, scoring on a sacrifice fly. The Hounds responded with a larger fifth, leading off with a long, left-fielder-burning line drive by Timmy Riggenbach (DH). Brian Lehman (LF/P) started the scoring with a pop fly single driving in one. With bases loaded, manager Tony Correa stepped to the plate and, defying the defense who had moved in their fielders, lofted a pitch at the eyes over the centerfielder for a double, scoring two. Kruse provided more padding knocking in one with a single to put the Hounds lead at 6-1.

The Marlins offense woke up in the next frame, however, and their heart of the order smacked a single and two doubles. That, combined with a well-placed bunt turned collision at first base ruled safe, gave the Marlins four more runs to put them within one run of the lead. The Doggos could not mount a response, and their half ended with a double play. The Marlins scraped together a single, a triple, and a sac fly to take a one run lead in the top of the final inning.

The final half of the final inning started with a walk from Marlins ever-pitcher Andrew Laluz, pitching on short rest. Following a fielder’s choice grounder, saved from being a double play by sliding courtesy runner Brandon Jessee (CF), the home team strung together a pair singles, one by line-drive machine Greg Sells (SS) and the other an RBI liner to the outfield by pinch hitting daddy-in-waiting Matt Burch (PH). The game was tied and the following batter, Tim Riggenbach, found himself intentionally walked to load the bases. After the second out was recorded, the dangerous Alberto Martinez (1B) came up to bat. The former minor leaguer took two early strikes, then delivered a single up the middle to score Sells from third to win the game.

Joyously, the Hounds stormed the field, jumping up and down with the hero of the game, one teammate even unbuttoning and removing Martinez’s jersey. Post game, after handshakes had been exchanged, players and fans were treated to only-for-winners beers from “Big T” Correa. The fans throughout the game provided raucous cheers and encouragement. Parents, girlfriends, wives, nephews, nieces, and “crew”s all helped push the team over the top. After the beers at the park, many mozied over to sponsor K’s Dugout and mogged on pizza and had a few more beers.

The Doggos will have nearly a week of rest before taking on the Dodgers in the CMBA semifinals on Saturday at Simeon.